A strong emphasis is placed on fish welfare and environmental conservation

The Albury Estate fish farm, managed by Richard King, is located in the tranquility of Surrey hills. The farm is supplied by 8 artesian springs from the North Downs aquifers, where the water flows into the River Tillingbourne and on towards the River Wey.

The fish farm purchases triploid (sterile) and late maturing female fry from 2-5 grammes, which are reared in the fry unit before being graded to the on-growing units.

Fish feed used on the trout farm is of the desirable high protein and high oil diets, mostly consisting of fish meal, to produce fish high in omega-3 fatty acids, which is beneficial to the human heart and brain. To reduce the high costs of diets, there is a modern shift towards plant based proteins, which contain omega 6 fatty acids, to subsidise the fish meal. This is something that I keep a close eye on. The feed I use is non GMO and supplied by either Biomar of Denmark or Alltechcoppens of Holland.

Trout utilise lipids (fish oils) in the diet for energy and protein for growth. Despite experiencing relatively constant temperatures, the fish are fed slightly different diets, according to the time of year ,i.e. Lower lipid levels in winter due to lower temperatures and shorter day length. 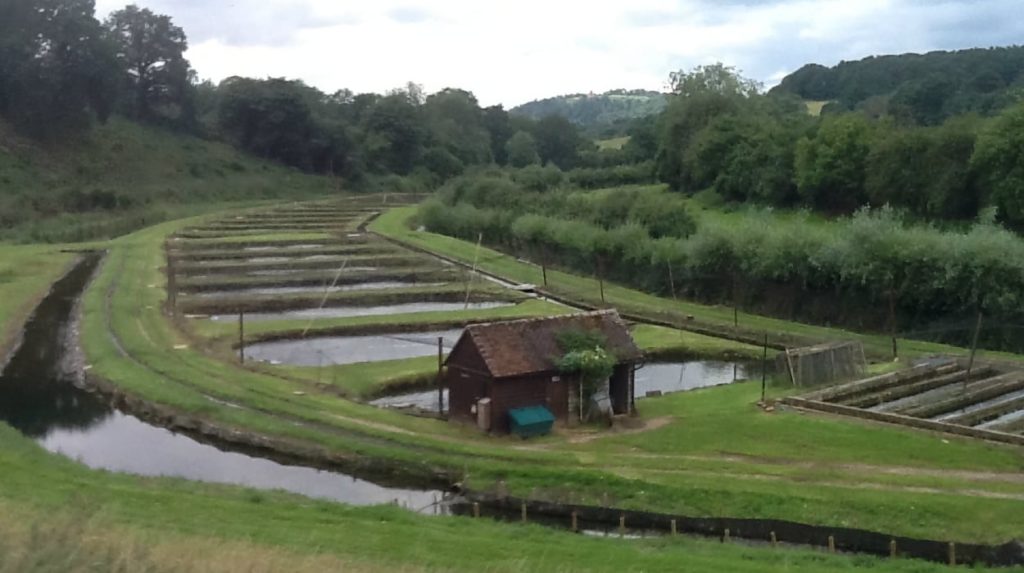 The Brown trout (Salmo trutta) that are stocked are 100% triploid, which is a legal requirement, stipulated by the EA, so that farmed fish do not dilute the natural gene pool of the wild trout populations. The Tillingbourne wild stocks have noticeable red spots, unlike the farmed fish and are usually much smaller.

The Blue trout, Albino, Sandy and Golden trout that are stocked are all in fact variants of the Rainbow trout (Oncorhynchus my kiss), which don’t require any additional stocking consent requirements, unlike the exotic trout variants imported from Poland, such as the Sparctic trout (Salvelinus fontinalis X salvelinus alpinus), which is a Brook trout/ Artic Char hybrid.

Tiger trout were stocked again after a 12 year break, partly due to the classification of on line and enclosed water stocking permission by the EA and management preference. The Tiger trout is a hybrid of the brown trout (Salmo trutta X Salvelinus fontinalis). The eggs of a female brown trout are fertilised with a male brook trout. However, as I use Brown trout whose gene pool originated from the river Test in Hampshire, it has been challenging for many people to spot the difference between brown and tiger trout caught.

I am currently growing a small batch of Artic Char (Salvelinus alpinus) for future stocking- these are very pretty fish, but very shy and possibly challenging to catch. This species has the lowest temperature threshold of any salmoid, but also has the weakest threshold at upper temperatures!

By true definition the Brook and Sparctic fish are in fact Char and not trout, despite it’s common name! Either way we hope you enjoy your fishing, whatever you catch. 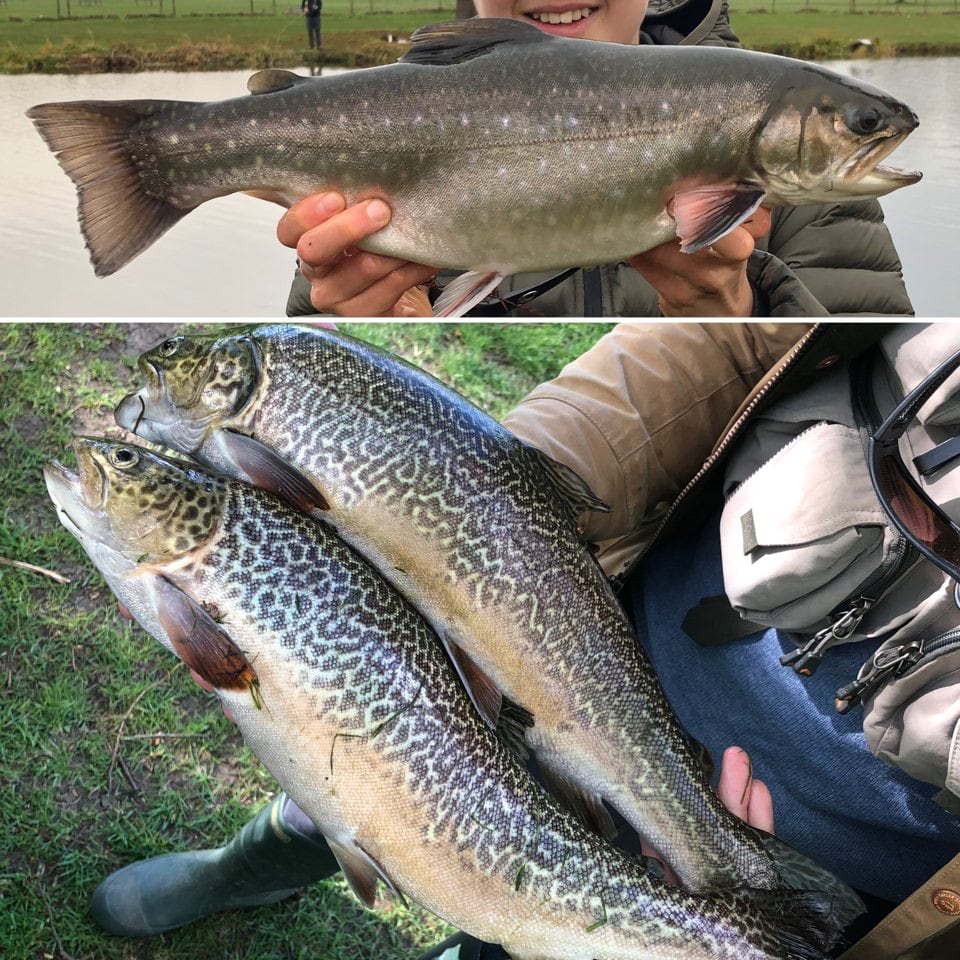 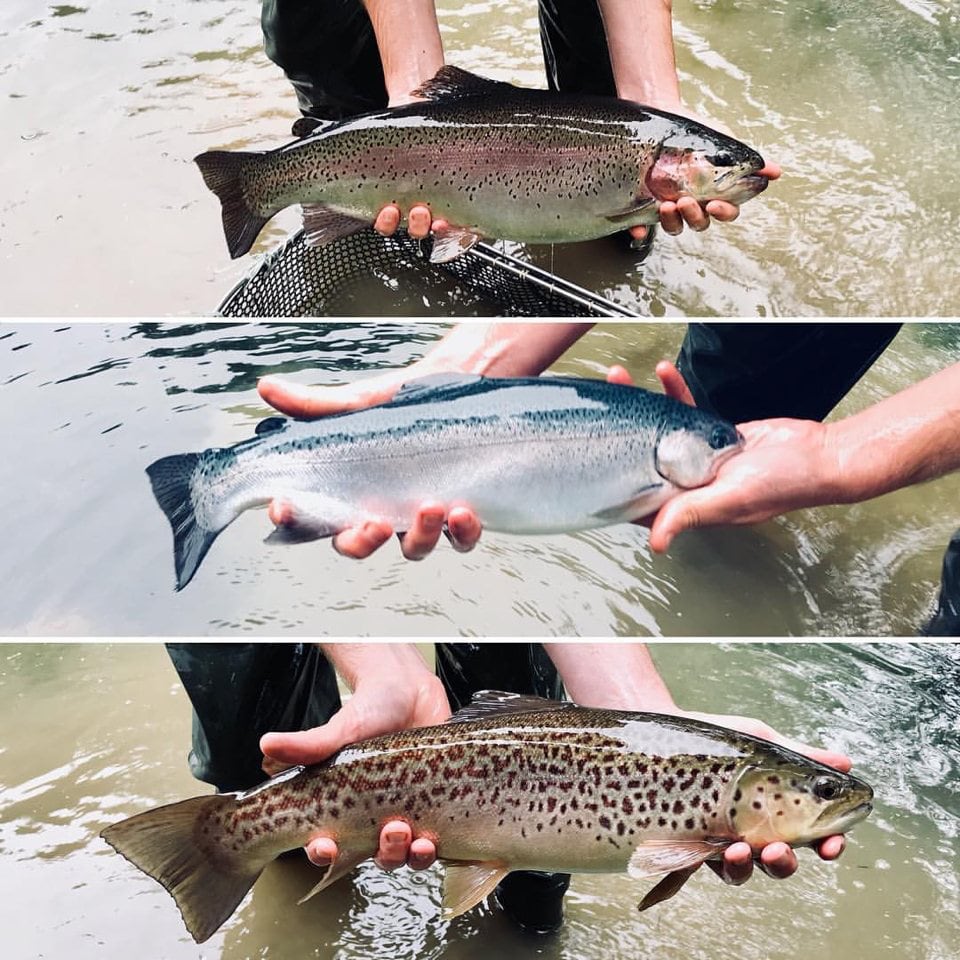 Learn To Fly Fish or Enhance Your Skills